Two things happened this weekend that were super hot and damn if she just does these things because that's who she is - not because she's trying to find ways to make it hot for me.  I guess we're just very lucky to have found each other.

The first thing was one word, one simple comment, that had me buzzing for the rest of the day.  The background of this story is that I have a high pressure job and I've been trying to find alternative careers to make the same $$$, but being less stressed and busy.  We are both successful in our jobs.  She has been doing better and better and if things keep going well, there is an opportunity for her to go off on her own.  I had never mentioned it to her, but I had been thinking about her opening her own company and then I would do everything related to the business side, while she would be doing all the work to make the money.

As I was going out the door, there were some comments made by her that brought this subject up in my mind.  I quickly just started saying "actually, I had been thinking about this. . . ." and I proceeded to briefly explain the plan.  She was listening intently and ended up saying "so you'd be my bitch."  It caught me completely off guard, I wasn't sure I heard her correctly and I had kept talking a bit, and then paused.  I asked "what?" and she said it again.  I smiled, she smiled, I said "well, sure" and then we kept discussing the plan.

That little quip just got me all worked up and excited for a long time.  It really makes me want this whole thing to come to fruition more and more.  I know I'd love to go to work every day!

The second thing that happened was Sunday morning.  Long story short, after waking up, I went down on her and brought her off very nicely.  I was wearing thong panties and nothing else.  She began rubbing me through the panties.  Laying on my back, she leisurely kept rubbing - pressing under my balls and massaging.  Even hard, she was not stroking and I stayed in panties the entire time.  I eventually came in my panties.  It's not the way that I want it to happen all the time, but it was great that she did it that way!

Anyone else notice that their readership has gone down since Google discontinued Google Reader?  I know that I have not kept up on reading other people's blogs nearly as much as I used to since it was taken off line.  The Google Reader was so great - and now I'm not sure how to find something that is equal.

There hasn't been much to update, though I think we are at a good place now.  I don't push or suggest anything.  I take whatever she gives, whenever she gives it.  I do my own things to try to please her, but I know she doesn't want a relationship where I am her slave or doing everything for her.  Whenever I notice that she's busy or stressed I make sure to do something to help her out.  That can be anything from the chocolate on the pillow, or doing the errand or something else.

A good example is that recently we were sitting there and she noticed her toes were starting to chip and she said "look how bad my toes are, you're not keeping up on your job."  I ended up doing her toes, but here's the thing: had I not offered to do them later on, she would not have mentioned anything about it, nor would she have ordered me to do it.  Nor was there any "punishment" for letting them get bad.  And here's the other side of that coin - if I were to try to institute a rule where I work on her toes at least once a week, she wouldn't like that either.  She would not like the rigidity of the whole thing and more importantly, she would feel that I was doing too much for her, which in turn would make her feel guilty.

So I try my best to do the things I know will make her happy.  Would I want a more involved and/or intense WLM?  Yep.  But since she doesn't desire it, my desire for it is much less than it used to be.
Posted by Another One at 3:19 PM 2 comments:

At least the writer of this article recognized how silly it was that a study was done to determine this.  Next headline you'll read is that fish like the water.

Recently my wife was working at night.  She was not sure when she would be home.  After I put the kids to bed, I had been still feeling the pull of the light cross-dressing I engage in from time to time.  Either wearing some women's clothing or in this case, I decided to paint my toes.

I was upstairs on our bed painting them a nice pink color.  I was almost done with one foot when I heard her walk through the door.  Now, despite her knowledge that I do these things and the fact that my underwear drawer is half boxer, 1/4 thongs and 1/4 other panties which is fully within her knowledge, I always still get apprehensive.  I wonder if she's going to react negatively.  I immediately felt a pang of regret and wondered if I could hide the "evidence."  I immediately realized that would be futile because my toes were still wet and because the smell of polish is so pungent and unmistakable.

So, I sat and continued to polish as she walked in.  We made small talk for a bit and she wasn't even mentioning what I was doing.  I feared she was just going to ignore the so called elephant in the room, but as she was taking off her work clothes and changing, she said "you're doing them pink?  They look nice."  And that was that.  That simple comment made me feel very good.  We went about the rest of the night like we normally would.

Later that week, I was scheduled to go to a party that I thought was something like a jumpy house for the kids.  One that I would be required to be in the jumpy house, with my shoes off.  About 3-4 hours before the party, she reminded me about the party.  Without talking to her about the party, I ended up going to the bathroom to remove the polish.  I figured with my shoes off, I didn't want to take any chances with my socks getting pulled off or anything like that.  No need to embarrass myself or deal with kids in that manner.

Before the party started, she came down from the bathroom and asked why I took the polish off.  She had seen the pads with pink on it in the garbage can.  I explained my concern and she said "Oh, that's too bad.  It's not that kind of a party.  I wish you had asked me.  You had done such a good job and they looked great."  And that made me feel even better!  She is great.
Posted by Another One at 12:41 PM No comments:

Shouldn't be a surprise, but there are days and weeks where I'm not the least bit kinky.  On the other hand, as time passes there is a slow build up and it becomes all consuming.  It's difficult to shake.  I'm sitting here, wearing a thong and pantyhose under my work clothes.

In my office, with the flowers I bought for my wife for tonight.  A co-worker (young female) walks by my office and says "ooh, why did you buy flowers."  "Because I love my wife."  Her response: "Good boy."

Heels and a Conversation

She went to an event last weekend, which required her to get dressed up.  She was going with her partner, another woman.  I began texting her about what she was going to wear, she responded that she was wearing a dress, so I asked which one.  She sent a picture and mentioned she was going to wear the "heels."  I made a point to tell her how good she looked in the dress and that "you're gonna turn a lot of heads tonight. Can't wait to see you."

The heels she referred to are very much like the ones in the picture below. 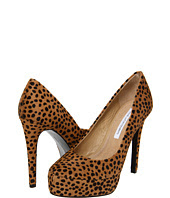 She NEVER wears them because she does not like high heels over 4 inches high.  I texted her back saying "I love it when you're wearing those heels - and taller than me."   She sent back a kiss.

I wasn't lying when I said I couldn't wait to see her that night.  Whenever she is wearing high heels, she  always turns heads, always gets compliments and always looks so damn hot.

When I finally got there, she was looking great and having a blast.  Fun fun night.  But what made the night a tad more interesting was that we ended up talking that night about same sex encounters.  She stated that she just simply has zero desire for doing anything with another woman.  Just nothing there for her.  I asked whether there was maybe a certain "type" that got her going more than others and she said no.  Women just didn't do it for her.  She could only see herself ever kissing another woman, but she did not even "want" to do that.  It was just that it's something that she wouldn't rule out.  She claimed that anything else sexual was not interesting to her at all.

The more revealing things to come out of the discussion, though were I admitted that I would absolutely be interested in same sex.  She asked point blank whether I'd want to give a blow job and without hesitation I stated yes.  I was nervous about that because I wondered if she would have a negative reaction.  It did not seem to bother her in the least.  I will never cheat on her (with a woman or a man), so if it were to ever happen, she'd either have to be there or give the okay to do it.  I think that she would be much more disturbed if I did it when she wasn't there, but I did not ask her the question.

The other interesting comment was that a woman recently tried to kiss her!  See my earlier post titled "Sunday" about the woman named Lilly.  Unbeknownst to me, earlier that night, Lilly asked if my wife if she could kiss her and she did briefly!  According to my wife, she said it was just a quick peck on the lips, but it was her belief that Lilly wanted a lot more.  My wife did not and did not even want the initial kiss, but they are good friends.  That gives that night a little more context to me!
Posted by Another One at 2:47 PM 6 comments:

Another One
I'm just a married guy on the West Coast who loves his wife. Having fun with her and you'll see why.